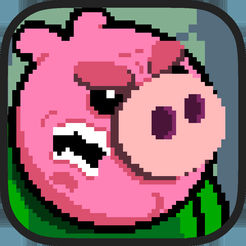 7.2out of 10
Official Waldo Review

Ammo Pigs, is exactly what I crave in a pixel-art platformer. Play as an armed and dangerous pig, seeking out to rescue locked up friends. I really enjoy the retro art style and movement of this game. The controls were a little tight, but it was full of high energy and action. I especially enjoyed the retro style music which fit perfectly with the theme. As an early participant to this game, I discovered a couple of bugs, like not being able to kill one of the enemies, despite shooting it point blank a thousand times. But I think after all the kinks are worked out, this game will have a huge following. Be sure to give this one a download.

In the future, there is no man. Only machine. And Pig.

It's the year 2049. Slaughterhouse A.I. controls the surface of the Earth, turning all life into sausage. Only the pigs remain to fight.

Steer your one-pig army through the dangerous hallways of meat factory battlegrounds as you attempt to rescue innocent pigs trapped and waiting for processing.

Relive the glory days of 2D platform gaming with this modern action classic.

This game was given a score of 7.2/10 which is good. Anything above a 5.0 is considered a great game. Below is a breakdown of the elements that were factored into the rating for this game. Even though Waldo's reviews are based on personal opinion, each game's rating follows a strict confidential rubric system for fairness.

User Interface Design (UI)
Game displays some but not all of the following: clean layout design, smooth transitions, animation / motion, good use of a color palette, orginality.
User Experience Design (UX)
Controls were sensitive. A few times I tried to shoot, but my finger wasn't directly over the button. I think that could be improved. Plus I found a couple of bugs.
Game Design
Pixel art is fantastic. Really love it when things blow up.
Learning Curve
Basic gameplay was easy to figure out, but some instructions were required.
Difficulty Progression
Difficulty progression was smooth yet challenging.
Playtime Longevity
It is a game that you will want to play for a week, but nothing more.
Sound Design
Music and/or sound effects fit the theme, but did not add value to the game.
Fun
Fun enough to make you play for hours even when you have other responsibilities or things you should be doing.
Concept Originality
Uses a concept that has been seen or used before but adds a very unique twist to that concept that makes it original on its own.
Post Production
Post production contains a well written description, screenshots, video and icon design.